So Malcolm Ryker is one of those guys that wears his sunglasses into nightclubs, but he’s not one you would want to call him out on for the lack of indoor sunshine. He’s got the attitude and 21 inch pythons to prove it!

You can hear Malcolm all over the Rock 94 and a Half airwaves, telling you about how you can win stubs to bad ass concerts and killer promotions, 24 hours a day, 7 days a week.

When Malcolm isn’t flexing those strong pipes of his, he can be heard all over the nation on his syndicated show, Skratch ‘N Sniff.

David Lee has one of those voices that we all wish we could have.  Being in the “biz” a tad bit longer than G.A., David’s resume involves stints in Wisconsin and Detroit doing radio known as “The poor man’s Joe Kelly”.  Once someone heard his voice in Quad Cities Iowa, and they recommended he be the voice of other stations.  Eventually, that voice would be heard all over the world.  But more importantly, David’s voice has been a part of Rock 94 1/2 since day 1 back in 1998.  PS.  Guys… If you ever wondered what it would feel like to have road rash on “righty and lefty”, ask David.  It happens when he walks. 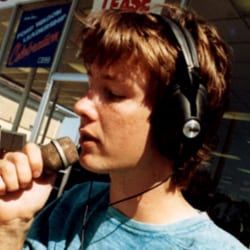