Not until he was older in age, did Scott discover that he had music in his genes.  Being born in the Philippines from an Air Force family, he learned that his dad loved music when he found his stash of old music reels and cassette tapes in a large box with his father’s drum set.  In the mid 80’s, the Steele family moved to New Mexico where they FINALLY got cable TV.  From a mother who loved classic country, and a dad who enjoyed oldies and classic rock, Scott found that Slash and CC Deville on MTV was the best thing ever!  Rock and radio collided when he was listening to “Pour Some Sugar On Me” at the age of 9, trying to sound like the DJ he heard on the radio.

After his family re-located to Washington State, a school field trip took Scott into a radio station at the age of 12, and that was the moment it was solidified…Radio was his calling.  Able to take summer classes at the vocational school in the Tri Cities, he got his first on-air experience at 88.1 The Alternative, based in Kennewick. His radio teacher at the time saw his passion for radio and invited him back each summer after that, and then eventually taking the official class his Junior and Senior years.

Trying to get a foot in the door of a commercial station, Scott quit his job at a certain “chickin’ dippin’ fast food joint” so he could follow his radio dream.  A school project got Scott to job shadow Curt Cartier at 97 Rock in the Tri Cities during his Junior year of High School. Tired of working overnights at an oldies radio station on the weekends for almost 2 years, Cartier gave him a chance at rock.  Years of learning the ropes of radio and sacrificing thousands of non-paid hours, Scott got on the air full time in 2002.  With three different ‘Scotts’ in one building, as the youngest, he got pegged with “Scotty”…but that wasn’t enough.  Walking past Cartier’s office one day, Curt called him “Bunz.”  Scotty gave Curt the WTF look, when the 2 C’s responded back with, “Ya know, like the Bunz of Steel videos.”  Obviously, the name stuck.

Bunz is now at Rock 94 and a Half with GA…Whom 20 years prior gave Cartier a shot in rock radio.  It’s like a weird Obi Wan, Yoda, Luke Skywalker turn of events. Scotty can be heard on The Fender Bender on weekdays from 2:00pm-6:00pm.But having his own show and a cool nickname isn’t all there is to Scotty Bunz; remembering where he came from and looking forward to the future, Scotty has a deep love of military equipment, and in his free time, frequently enjoys looking up to see Air Force jets fly around Spokane just to say, “America, F–K YEA!” 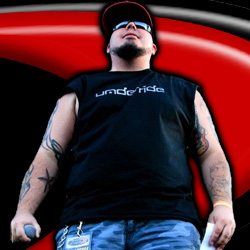